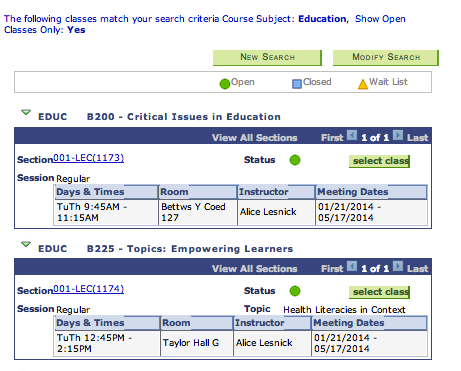 News and The Latest

During the months of November and April, like clockwork students receive an email from Registrar Lee Watkins explaining how to register for classes.

This Fall semester, for the first time, students registered for classes on a new system called Bionic, which is part of a broader system update to put Haverford and Bryn Mawr on a single student information platform.

Bionic is part of a larger project to upgrade campus technology called Seamless Administration Services, or SEADS, which integrates the OneCard system between Haverford and Bryn Mawr and creates a joint data warehouse for both colleges.

However, Bionic has run into problems and frustration among students and faculty is common.

“I still find it difficult to work with Bionic, as a UCA, [and] as a Haverford student,” said Fiona Lin ’14, who is also an upper class adviser for freshmen. “I know that part of that is because Bionic is something that’s new.”

Isabella Bertagna ‘16 said, “I am just not really sure how to use it. I find it super confusing.”

Hina Fatimah ’15 adds that the new structure is “much more helpful than the last system.”

According to Watkins, by far the largest problem students have faced involves prerequisite requirements. If students had not taken the specific course that Bionic required as a prerequisite for another class, they were not able to register for that class.

During registration this fall, Watkins was inundated with emails detailing problems with the new program. On September 3rd, the first day of classes and open registration, students received an email from Watkins late in the evening.

“It is now 10:30 p.m., way past my bedtime, and I still have over 200 unread emails from you, most telling me that Bionic is preventing you from dropping, adding, or otherwise registering for some course […] I am asking you this:  please stop the emails to me for tonight  Being at home, I cannot answer them mainly because I cannot access Bionic from anywhere but my office computer,” Watkins wrote. “I know of no other way to do this tonight and through today, my emails from students number over 700.  I’m exasperated with all of this, want to help, but right now am unable.”

For Watkins, who built the old registration system nearly 25 years ago, the switch to Bionic was like “losing an old friend.”

“In Bionic, it isn’t that easy to [correct problems] because I [am] learning it as well as you. I am getting pretty good at it now, but in September I wasn’t,” Watkins said.

The old registration interface was a limited system built by the College which allowed students to search for courses by name and add them to a simple list, which would be submitted by email to their adviser for their approval. Bionic, on the other hand, integrates registration into one platform, which also allows students to view their grades, academic record, student account, class history and more.

Watkins said a number of faculty are also displeased by the new software, which approves registration in bulk rather than allowing faculty to individually approve their advisee’s schedules.

While many of the initial issues have been resolved, students pre-registering for classes in the Spring are still running into some glitches, Watkins said. For example, many Bryn Mawr classes still erroneously require prerequisites.

“I didn’t realize how different it would be. It’s going to be okay I think, once we work out the problems,” said Watkins.

Spencer Golden, project manager for the Bionic rollout, said that these initial problems and adjustments are normal for any new software system.

“The process with a new system like Bionic inevitably changes from what it was and that requires students to get used to the new process.  In general we have received very little negative feedback from students,” Golden said.

After an initial wave of technical problems during registration, the complaints that remain seem to be over the layout and the aesthetics of Bionic’s interface.

“I have never had any major problems with it, other than that it’s kind of confusing to use,” said Julie Peterson ’16. “The website itself is not that well designed, but the things that the registrar sent out were really helpful to me, like the walk-throughs and whatnot.”

Golden added that while the software itself is “robust,” a future project is already planned to provide a more aesthetically pleasing user interface responsive to different mobile devices, such as tablets, iPads and smartphones.

Published in News and The Latest